In this week’s story we see the power of God to heal across borders and beliefs.

Naaman is a commander of the Aramean army—one of the enemies of Israel (we met this army a couple weeks ago in the “Chariots of Fire” story from 2 Kings 6).

While he is a mighty warrior, he suffers from leprosy, some sort of skin condition (not the same as what we know today as leprosy, but a more general term).

He hears about a prophet in Israel’s capital, Samaria, and goes there for healing. Sent by his king, he first approaches Israel’s king, who does not have the power to heal and fears he is being provoked to war when he surely fails to meet the king of Aram’s conditions (to heal Naaman). However, Elisha the prophet intercedes—by message, not in person—providing a space for God to show up and heal Naaman. 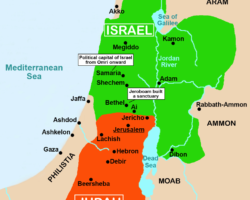 A student was talking to me this week about a news story she heard about conspiracies, and how it’s hard to accept a simple solution to a large problem, so conspiracy theories are developed to create a more complex answer.

Naaman seems to be acting this way—he can’t believe that the cure that will change his life, improve his capability to work, and remove his shame could be so simple. His servants rightly point out that if the command had been difficult and maybe even dangerous, he would have gladly taken the challenge; so why not do a simple and quick thing?

I think we sometimes approach our relationship with God this way. We expect it to be hard, complicated, or beyond our reach; we doubt our ability to be faithful; we question or despair at God’s commands and invitation. But I actually believe that when we follow God’s ways of love, peace, and justice, we are living the way God created us to be, so it should be “natural” for us to do so.

Perhaps the healing and peace we seek is easier than we think. To what might God be calling you today? Can you hear, and trust, and obey, whether it’s hard or easy?

The Rev. Kerri Parker of the Wisconsin Council of Churches recently made a connection between this story and our current situation. We’re not being asked to do something valiant, complicated, or dangerous during this pandemic, but something very simple and effective—WEAR A MASK! And yet so many people are reluctant to do so…

This story tells us something important about God: the grace of God, seen here in the healing of Naaman, is not limited to a particular group of people. Naaman proclaims there is only one God in all the earth, the God of Israel, and we see that God’s blessing and lovingkindness extend beyond any borders to all creation.