One of our most prominent, best-known stories in Christian tradition happens outside: the tomb is empty, and Mary stands, bewildered, in the garden, wondering what it all means. As a preacher I am challenged both by having the same story every single year (maybe from a different gospel; this is one of very few stories recorded in all four) and having more than one sermon possibility in this story. Preaching on this story when it isn’t Easter Sunday is also interesting: does the story sound different in August than it does in April?

We may be so familiar with this story that we miss some things that ought to be perplexing. 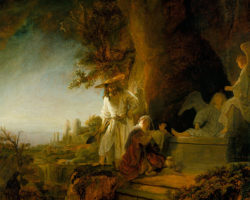 There just isn’t much to work with as a gardener around Jerusalem. There are a lot of rocks and of course now it’s a large city with 8 lanes of traffic running through the Kidron Valley between the Mount of Olives and the city walls. It might have been more pastoral in Jesus’ time, but it surely did not look like your yard or a city park.

The official (and contested) site of the Garden Tomb; not much for a gardener to do 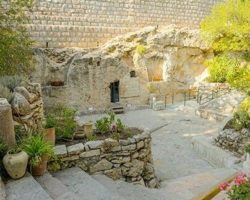 Engaging this story not-on-Easter is interesting and I would say essential for us as Christians, for we are reminded that resurrection is not a once-a-year occurrence. As Martin Luther instructs us to remember our baptism daily, the cycle of death and new life is ongoing. In this time of pandemic and uprising for social justice, we are surrounded by death, and by new life; by despair and hope. Our privileged illusion that we can control the world around us is shattered, yet from the rubble hope arises as we learn, again, to trust resurrection. Jesus stands outside the tomb, outside death, in the world and in life. The Holy One is not contained in a building or a tomb, in doctrine or practice, but is found right before our eyes. May the Spirit give us the faith to see Christ in our midst.