From the beginning of Christianity, the faithful held a commitment that people should hear the story of God’s love for the world in the language that is closest to their heart.

This was rooted in their deep understanding that God did not wait for us to learn God’s language; in Jesus God translated Godself into our reality.

Translating the message is key way to communicate that God has chosen to become one of us. The beauty of God’s story is heard in the language people use in everyday life.

Recently Pastor Phil spent two weeks in Guatemala with people involved in the latest embodiment of that commitment. 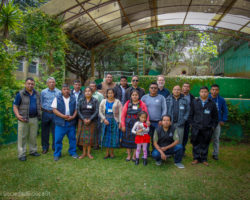 (Photos taken by Gadiel Xuruc on behalf of the Guatemalan Bible Society.)

Thirteen people chosen in their local communities came together to begin a project with the Guatemalan Bible Society so that their people will hear stories of God’s love from the Old Testament in their own language. Teams of four or five gifted, grassroots people from three different language groups (Ixil, Mam, and Sipakapense) began a three-year process that will result in twenty-five stories translated and learned to tell orally by each member of the team.

While this process may extend into print or electronic media one day, right now its focus is on the oral, live presentation of the translations each team made.

The process unfolded in the following manner.

After a couple of days of general orientation to skills needed by our translators/storytellers, Pastor Phil told the story of the Creation of Adam and Eve to the participants in their (and his) second language, Spanish.

Together they paid attention to details in the story as they heard it repeated again and again. No printed copies of the passage were allowed so that the oral process would not be derailed by the printed word.

We made sure we understood the plot, and paid attention to surprising moments in it. Then we listened to it and each tried to retell it in their own language as best they could.

We figured out how to introduce the story and bring it to a close. We discussed the main point the story drives home. We struggled with words that would be challenging to move into the language that awaited them. Then we listened to it again. 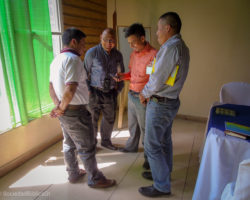 All the while, repeated hearing of the story (either live from me or in an audio recording) kept us glued to the actual biblical passage that has traveled through the centuries to us. This is not about improvisation, but translation proper.

In the afternoon, having explored the passage together in the morning, the teams began to translate it into their own language. First they would tell and record it as best they could from the memory implanted in the morning. Then they would listen to the recording, section by section, and be sure all the narration in the source translation was included in their own translation. Whenever there was an omission or an error was introduced, they would rework the audio to polish the translation. 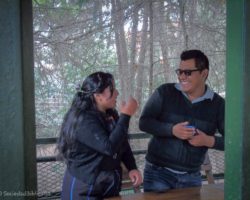 Later in the week the teams created what is called a back translation. This is a literal, word by word, rustic translation of the new language translation they had created back into Spanish. It is the first time that the passage is rendered in writing. It sounds awkward and odd as word order and idioms defy the norms that Spanish expects.

They record again or edit the earlier recording to have an official guide translation of the passage for them to use in their performance preparation. 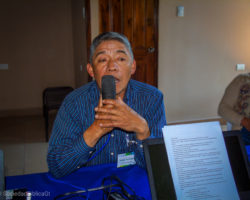 The process was enriching and rewarding for all involved. Laughter and delight filled our days. Most importantly we will also provide these communities with the Word of God spoken in the same language their mother’s used to sing them lullabies. I am thankful to the American Bible Society for using me to support their Guatemalan counterparts.

Grace Lutheran Church, you were good enough to share your pastor with the Guatemalans so he could share in Spanish what he knows about the art of biblical storytelling.

I believe the pastor you sent has returned to you with more abundant gifts to share with you, gifts born of this whole communal process. In giving our Guatemalan brothers and sisters of your pastor’s time and energy, you too will receive.

Thanks be to God.